So, last Thursday Emmissima and I went to the wonderful Soho Theatre on Dean Street to watch Bea. The play was absolutely wonderful – the story of a young girl bedridden and cared for by Not Gay Ray, who inside is dancing (to Madonna’s Ray Of Light) while in the physical world persuading her mother that she wants to die. Yes this doesn’t sound to everyone’s taste (The Chef hinted he’d rather have his eyeballs removed, and many of my friends tell me theatre isn’t their “thing”) but I’ve never seen a dud at Soho Theatre and this was no different. For a subject so moving (we were BLUBBING by the end), I also laughed my head off, was amazed at the incredible acting, found it thought-provoking and interesting and sexy and clever and beautiful. It’s not on anymore so I’m not going to go on about it, but it got me thinking – I absolutely love going to the theatre and I really need to go more.

I’ve seen several plays at Soho Theatre and the Barbican and they have, without exception, been brilliant. Often modern and novel and exciting (in particular the amazing Moonwalking in Chinatown where we walked round Soho as actors appeared out of alleyways and shops), with impeccable acting from unknown actors and some you recognise, and an intimate venue with a wonderful atmosphere. A good play will make you think about the world, and your life, and question how you live it. A good play observes the world and philosophises about it, prods it, and holds it up for you to see more clearly. A good play will make you laugh and cry and go through a whole spectrum of emotions so that you come out thinking about stuff and emotionally filled up or squeezed out like a sponge.

But I have had a couple of bad experiences in London theatres. I saw Three Days of Rain with James McAvoy at the Apollo Theatre and our £30 tickets only got us up in the Gods, in the nosebleed seats that made me hot and claustrophobic and enabled me to view only the top of McAvoy’s head (lovely though it was). My £25 got me the same vertigo-inducing seats at …ahem …Legally Blonde. Paying so much to be so far from the stage is a bit of a pain. And to show you the difference between going to one of London’s big theatres to pay over the odds for a crappy seat and a smaller venue, the photo below shows my view at the Soho Theatre – seats right at the front, making me feel part of the whole performance. Plus the tickets were only £20 each – or £10 if you’d gone during the preview week. It’s always a gamble how much you’ll enjoy a play so I’d have to be really keen to pay much more. 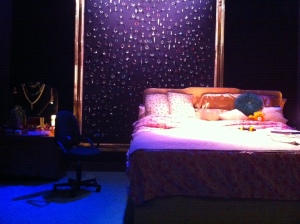 So my advice is to keep a look out for interesting plays at a small, intimate theatre near you – perhaps one that pushes the boundaries when it comes to exciting or modern plays. Keep an eye out for the review pages in the Evening Standard and the Metro. Venues to try include the Landor Theatre in Clapham, the Tricycle Theatre in Kilburn, the Finborough Theatre near Earl’s Court, the New Players Theatre by Charing Cross (I saw a brilliant version of Vagina Monologues there last summer), the Battersea Arts Centre and Riverside Studios in Hammersmith. Riverside Studios often gets amazingly famous actors but this doesn’t necessarily mean they’ll be great theatre actors (I recall a so-bad-it’s-good version of Fool For Love with Sadie Frost and Carl Barat). Often if you see the a play in its first week you can get tickets for £10 or less (certainly at Soho Theatre or Riverside Studios).  Be adventurous and open-minded. This is of course not to say I would avoid the big uns. Legally Blonde and The Producers were a larf and a half. Seeing David Suchet and James McAvoy live were amazing experiences. And I’d love to see War Horse and check out the Old Vic. However, I accept I may be behind a pillar somewhere near the roof.

I should also say a good theatre should also have a good bar filled with handsome arty types where you can drink red wine and talk about the play, and, if possible, where the actors go for a quick swally after the play which adds to the frisson and the feeling of community. Soho Theatre, Riverside Studios, the New Players Theatre and the Barbican have decent bars, and the Landor Theatre is actually in a bar – I especially like the bar at Soho Theatre and Riverside Studios has a terrace overlooking the river for the summer.