Steak in Buenos Aires and thoughts on hospitality 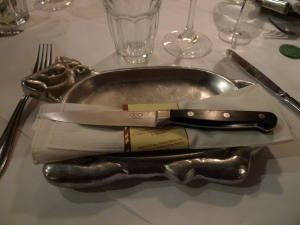 This is a tale of two cities. It begins in London, on the lift to the Picadilly Line in Covent Garden. There was I, be-hooded and backpacked, contemplating my solo trip to Argentina. On walked a well-spoken man in a suit who started by shouting “can you move down” (there was plenty of room) and then for good measure “and stop being such fucking tourists“. I noted with pleasure that the tourists at the front werent listening but I, looking like a fucking tourist myself, took the brunt of his anger as he squished me into the wall. What a terrible day he must have had to act like such a wanker, I thought, but what a miserable git – has he never been a tourist himself?

Soon after that I saw a young Chinese woman in the tube asking for “terminal four” repeatedly and being told by an eye-rolling woman (who got off at Knightsbridge) that she had no idea what she was saying. Everyone seemed to be looking at their feet but I managed to step in to help before the woman burst into tears – Ive been there before somewhere foreign on my own and lost and scared – and to give Londoners their due, others stepped in to help too. Which proved hard as her knowledge of English didnt really extend further than “terminal four” (which I have sympathy with – Im currently touring Argentina with only the words “una botella de vino tinto por favor” for company).

I didnt fret too much – as you know I believe in karma so I know that the universe will be depositing one of its short and curlies in besuited man and posh womans dinner any time soon. And karma shined its face on me too, as a payback for the lift-squashage. A woman in buddhist robes gave up her seat for me on the plane as my headset wasnt working, and will presumably achieve more favourable reincarnation as a result of missing out on Twilight Eclipse.

And the good karma continued for me – I was taken out in Buenos Aires by Yanina and Mathias with whom I share only a tenuous connection, being a friend of a friend of a friend. And yet they took me out on my first night in Buenos Aires to Palermos La Cabrera, one of BAs best steakhouses, for a night of delicious steak and wine courtesy of Altos Las Hormigas – the malbec made in the vineyard for whom my friend Aileen works, who I am visiting next week. Everything they say about Argentinian steak is true – it is perfectly cooked, tender and mouth-wateringly delicious. I will try to figure out why by my next post when I will have tried some Mendoza asados. The wine was also wonderful – deep and spicy as if made by red ants (and available in Londres at Waitrose and other posh wine places). It was our noche de las hormigas and I had a wonderful time. I was touched at the warmth and kindness shown to me by these almost-strangers especially in light of the tourist-bashing Id seen in London. The people of Argentina seem to share a warmth and kindness that makes travelling here fantastically easy and fun. Although they eat bloody late (dinner doesnt start until 10pm earliest and on my first jet-lagged night we didnt sit down at our table until midnight). UPDATE: I realise this paragraph doesnt make much sense unless I explain that Hormigas means ants in English. There are little ants on the wine bottle – cute. 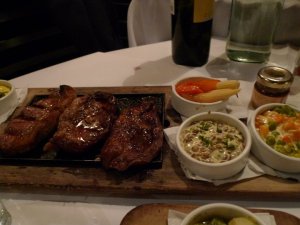 I also managed to panic when ordering in La Boca and ordered the giant steak below. It was the bife de chorizo and really meant for 2 people (man next to me ordered 1/2) but I was too ashamed to show Id made a mistake so bravely ate 3/4 of it myself. And now want only pasta for the next couple of days. But it was lovely too. 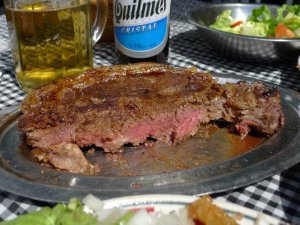 Im now in Iguazu, in a hostel with a pool and swimming in the sun, but on the top bed of a crowded dorm bunk bed in a hostel with terrible music and a happy hour. So you cant have everything. I got here through the kindness of an old man who helped me – having the wrong ticket and there at the wrong time – to get the right bus. Remember its the Olympics in London soon so we will be flooded with touristas. So I make a pledge now to be nicer, to help people looking lost, and not to suddenly find my navel fascinating when someone asks for help.

Please note I have been unable to find the apostrophe on this Argentinian keyboard, I have not lost all ability to spell.

17 responses to “Steak in Buenos Aires and thoughts on hospitality”