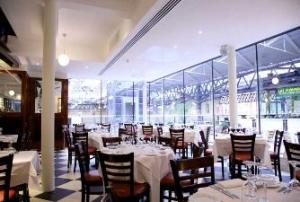 After a  shocking week at work, I stumbled grey and adrenalin-parched to Spitalfields market with El G and El G Madre for some Friday beers.  Looking for food, we decided to go to Le Bouchon Breton.

I’ve been going to Le Bouchon Bordelais on Battersea Rise for years, preferring the bistro side to the restaurant side; chatting happily over carafes of wine and quiche.  Filled with French expats, rugby on the TV, it takes me back to laid-back expat days in France and Belgium.

Le Bouchon Breton is deliberately City-fied.  I’ve been there for lunch a couple of times with workmates and it caters well for City lunches although the service is a little touch and go.  On Friday night I’m sad to say it was pretty empty.

The things I liked about it:  light and airy French brasserie venue; good French music playing; the fact I got to chat happily in French to the waiter; lovely house red; perfect steak frites with rare steak, thin chips and tasty bearnaise; delicious cheese course with stinky, runny, eclectic selection.

The things I didn’t like about it: the fact it was empty; being asked if we wanted champagne when we sat down (yes we might want champagne but its nice to think of it ourselves?); having to find a waiter each time we wanted to order something; being sent over the sommelier when we ordered the house red; the price (almost £40 each for 1 main, 1/3rd bottle of wine; 1/3 cheese platter).

I still think it’s worth going if you’re in the City and pine after something French (especially if you have the money to order champagne and lobster) – and after all, what is more authentic French than bad service?  (Ho ho to my French friends – je rigole).  A French-speaking couple walked in just after us, ordered champagne and a seafood platter which was flambeed in vodka in front of them – and even though they were the only people left in the restaurant when we left just after 11pm, they looked like they were having a wonderful meal.

Other decent French restaurants in London are Gastro in Clapham, Pierre Victoire in Soho, and the wonderful Brasserie Toulouse-Lautrec jazz bar and resto in Kennington.