I LOVE hip hop and street dance – really good beats and great way to exercise.  I’ve been to Pineapple dance studios in Covent Garden which looked like it had great classes, but I ended up going for Urban Groovz, a street dance class by Creation Dance (http://www.creationdance.co.uk/) which took place near my flat in Clapham North arts studios.  The teacher gave us a new dance routine each week which we practiced and then danced to with a hip hop dance track.  Some of the moves were great (and widely copied after a few too many glasses of vino at the weekend) and it felt good to nail some of the routines, but one problem was that as it was quite complicated, there was a lot of stopping and starting, which meant that I didnt really work up a sweat enough.  Next, I  want to try ballet at the Clapham Manor Centre and another hip hop class at Pineapple Studios.

In the meantime, The Herbaliser are doing a set at Plan B in Brixton on Friday 4 December – I’m definitely planning to go along. 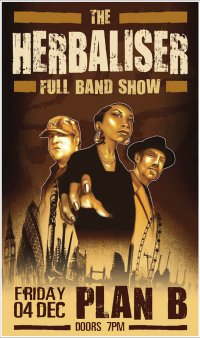